Days of Discovery and Gratitude by Hope McMath

Days of Discovery and Gratitude by Hope McMath

This week I spent several days visiting every corner of our city.  This doesn’t seem like much of a feat in many places, but in the largest city by landmass in the mainland US it requires a bit of fortitude, the smarter-than-me maps on my phone, and a good reason to do so. 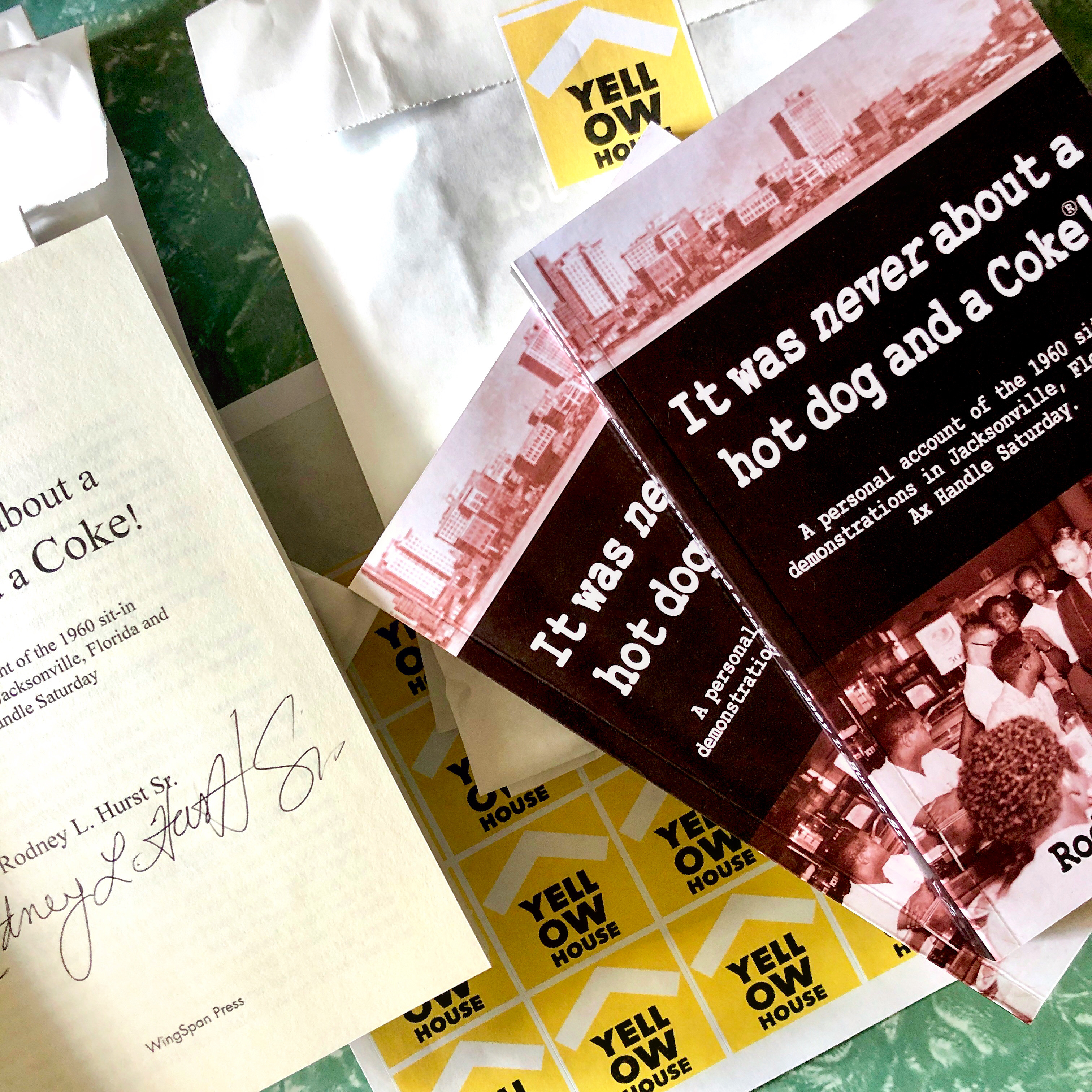 I was delivering a backlog of objects to the porches of the people who requested them.  Books, art, and food.  The books…46 copies of It Was Never About a Hotdog and a Coke, written and signed by my friend and mentor Mr. Rodney L. Hurst Sr., were finally making their way into the hands of people who requested the volume as part of the new initiative at Yellow House called Book Drop.  The book recounts the events before, during and immediately after Ax Handle Saturday.  I was inspired by the eagerness from 50 people who wanted to learn more.

The art…11 modest images that I have carved and printed to make visible my angst and desires.  Every time someone purchases one of these works I am surprised, still unbelieving that I have created something that others want.

The food…fresh produce in small batches for a dozen homes who are experiencing food shortages during a time of less employment and over-tapped social services.

With a car full of goods, individually wrapped and marked mostly with the names of strangers, I headed out.  I was behind, which is not unusual for me, but two weeks of quarantine as I waited on Covid19 test results meant my delay was especially long.  What ensued was a seemingly mundane two-day foray into my city, spurred by the fact that I am too cheap to mail all of this and too curious about this collection of people who are a part of my extended family. 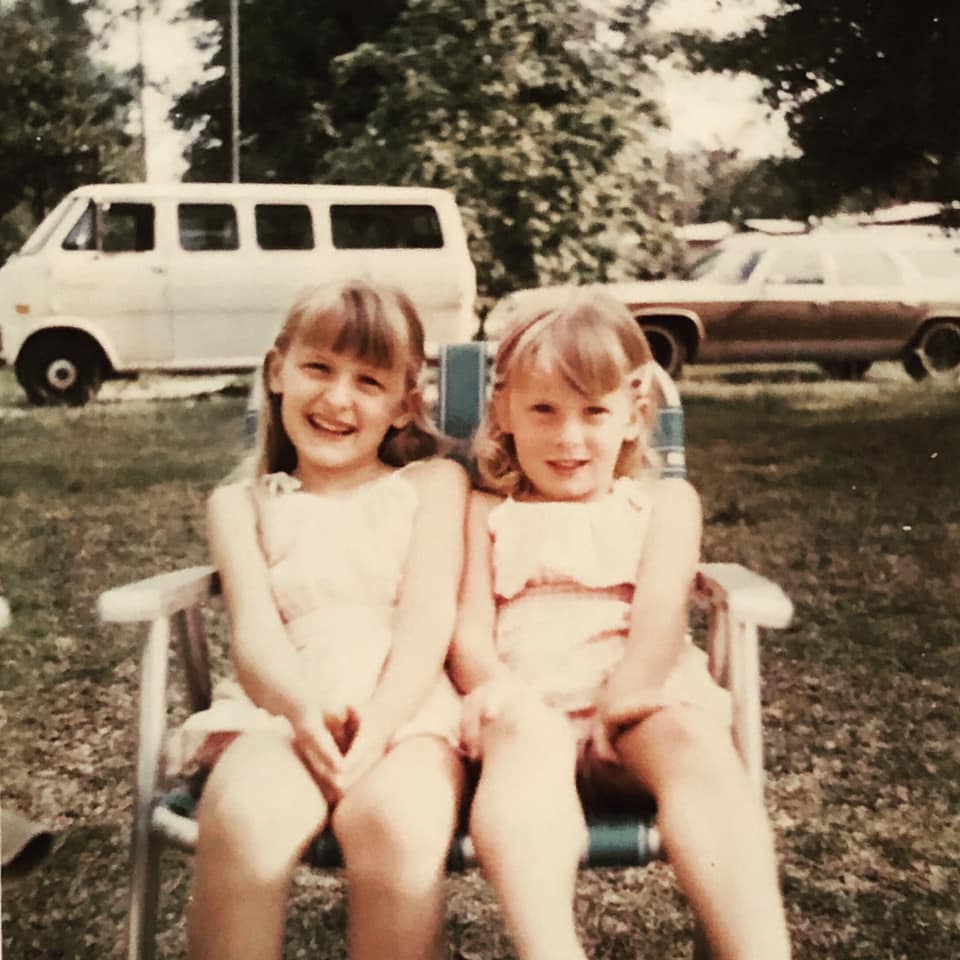 I was born and raised in this city I now call Jax (preferring not to use its full, murderous name). I grew up in Arlington, two blocks from my elementary school and within two miles of my middle and high schools. The in-between years saw me and thousands of students, from every corner of the city, bussed to ‘centers’ for 6th and 7th grades.  Desegregation of our school system was underway…still.  It was 1979.  I enjoyed those long bus rides with friends to schools tucked into neighborhoods further north, further south.  My diverse community of kids were lifted up out of the streets we roamed on the weekends and hot summer days and plunked down into neighborhoods that belonged to others.

For the sake of creating more diverse schools, we were bused to a predominately Black community as one step in breaking down the walls that had existed in our city since the time in which the indigenous lands were stolen at the hands of the French, then the Spanish and the English.  I never quite understood, because my only lived experience was in a place where, at least on the surface, those walls did not exist.

The irony of this was that I had the great fortune of growing up on a humble block that was about as diverse as a community could be.  On Ligustrum Road we were families and elders, Black and white, from the Philippines and Germany, confederate flag wavers and anti-war liberals, Catholics, Baptists, Atheists, and those who would never say.  It was a working class neighborhood filled with nurses, factory workers, military, mechanics, teachers, waitresses, and those that would never say.  Although my sis, Beth, and I loved where we lived, I had little appreciation for how right it was until much later in life.

But not every friend in the surrounding area joined us on those long daily bus rides (which aren’t actually that long by adult standards).  A good number of my white neighbors started going to schools where uniforms were worn, chapel was often a class, and no faces of color existed.  I remember little about how this struck me at the time, but I do remember being shocked that their families were now paying for them to go to school.  Not just for the uniforms, but to be ‘saved’ from taking the bus, and being schooled on another side of town. 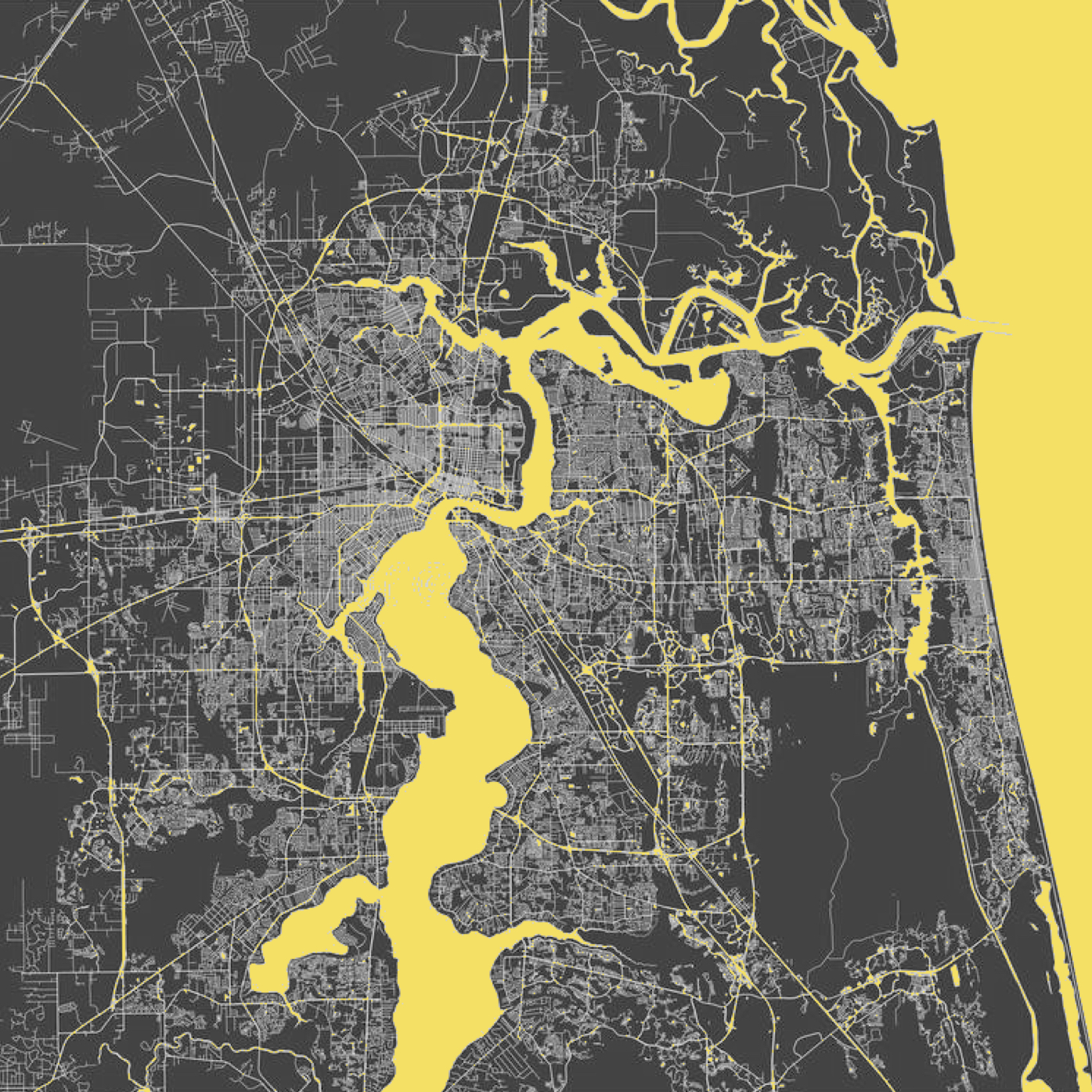 This week, as an adult, I did what I have done hundreds of times since those early treks around my city on school bus #264 and during hours-long bike rides with no destination in mind.  I was visiting pockets of a place I always assume I know well.  I went far north, past the airport and deep west where farms are still the norm.  I went south, just past our city’s boundaries, to a place where a town was born over night and as far east as you can drive without hitting the salt water edges of the continent.

In Jax there is water, water everywhere in this corner of the world.  I found myself on both sides of many a river…from the mighty St. Johns to the Trout, Ribault, Arlington, Pottsburg, Broward, Cedar, and San Pablo rivers.  I stood next to the ocean’s edge and rode along the length of the Intercoastal Waterway. I drove past marshes that absorb the rising waters and streets whose drainage systems clearly could not handle the rain from the day before.  I lost count of the bridges I crossed, physical and otherwise.

I stopped on 69 porches, stoops, and driveways in 28 different zip codes.  So many of these streets are familiar and are a part of my daily existence.  Others I had not seen some of these pockets in many years and there were several that I had never visited.  I experienced a high each time I came into blocks new to me, reminding me of the bubble I still occupy.  Is this what explorers during the age of colonialism felt…the rush of finding a new place that was not new at all?

Signs mark neighborhoods as Paradise, Pleasantville, and Shangri La.  Paved corridors are named for KKK leaders and martyred Civil Rights icons.  Streets with hardly a tree in sight are designated with the words peach, cherry, pine, laurel, or oak.  During this election season campaign signs are plenty. There are also a few too many flags dedicated to the lost causes led by earlier enslavers and the current President. Yet many a front window is filled with rainbows, BLM posters, and statements proclaiming a commitment to all people.

Beyond the geography and size of the city, these days of delivery reminded me of the beauty and diversity of the people who live here, despite the deep divisions.  The segregation of the city still exists, holding both the stench of the past and a powerful sense of authentic place and culture.  You can see it in the food offered, the place names, the dress on the street, the music wafting from homes and businesses.  And it is beautiful.  But there are also extremes that swing so wide it is jarring to experience, over and over again in such a concentrated set of hours. And often these contrasts – defined by race, economics, and disinvestment –  live only blocks from each other. 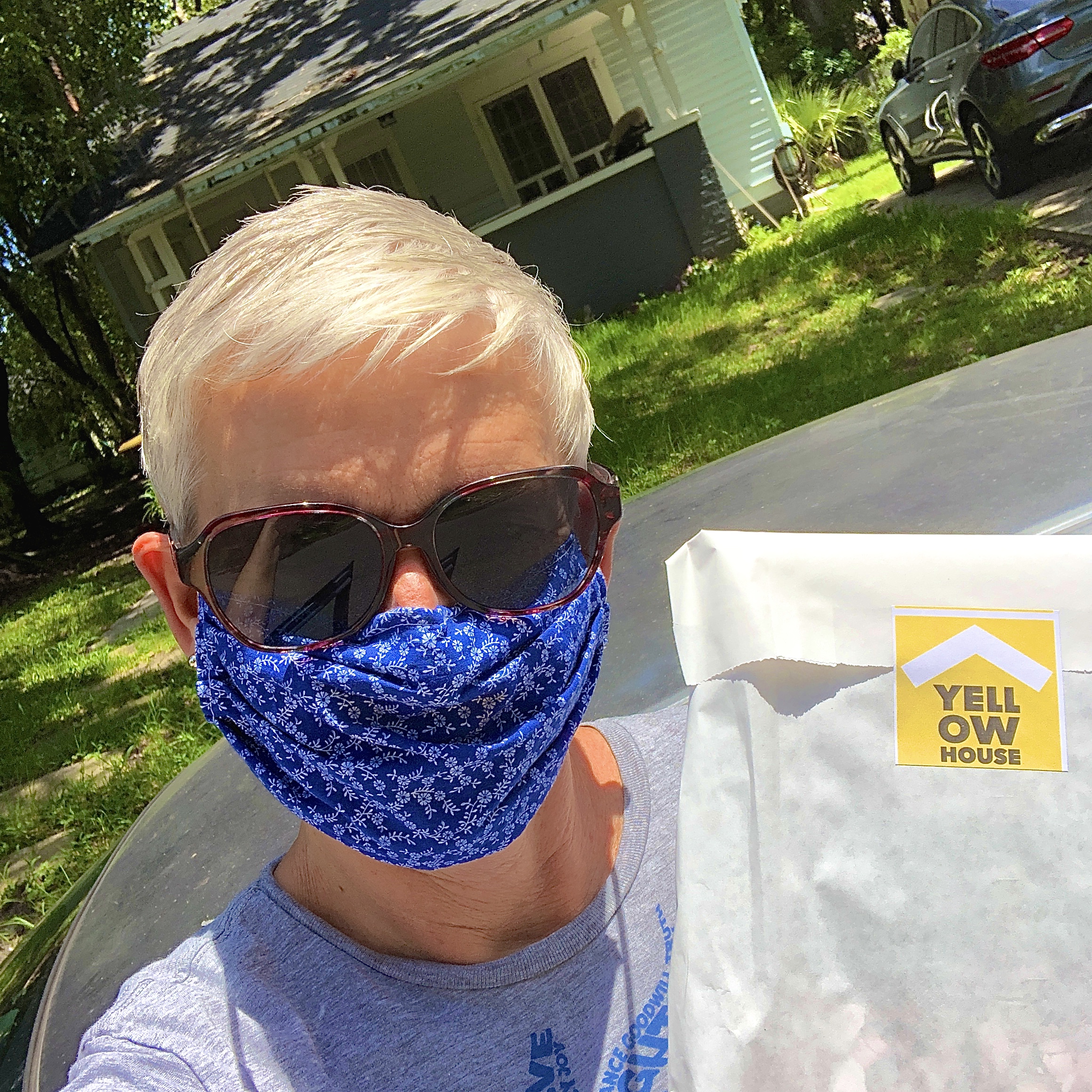 Due to the pandemic, my book and art drops were intended to be fully distanced, stealth even.  With each address found I would don my mask, exit my car and find the best spot to leave the treasure.  Most often a mailbox, but often a slot in the front door or a bench on the porch. Occasionally it had to be left in a plastic bag outside a fence being aptly protected by a fierce furry friend. From multi-unit apartment buildings to historic bungalows and from rooms-for-rent to mansions beyond security gates…this is where the members of our Yellow House family, who are fortunate enough to have a roof over their heads, live.

But, my silent ways were happily interrupted dozens of times with conversations in the front yard, across the fence, through the burglar bars.  Quick check-ins with people I miss seeing and introductions to those not previously met.  Young, old, wealthy, poor, moms with babes on their hips, and slow-moving men who asked if I could haul their trash can back to where it belongs.  Each one had tossed out a thread to connect us…a request for a book about a history that I did not learn until I was many, many years beyond 6th grade, or the acquisition of a work of art they “could not live without.”

Each time I went to turn away I lowered my mask so that they could see me smile. I still can’t get used to being so hidden behind the mask I wear for their care and my continuation.  If I can’t hug you, touch your hand, or say ‘thank you’ so that you can see it and not just hear it, I don’t feel myself. I am working hard to translate a smile through my eyes, but for this bespectacled one I find the attempt artificial and too subtle.

I am grateful to everyone who was one one of the 69 pins on my map of many miles. My journey to each person’s abode provided a deeper understanding of my city.  It is a continuation of my experiences as a 6th grader trying to make sense of situations rarely discussed.  And while my continued awakening feeds an anger and frustration based on the inequities, poor leadership, historic marginalization, and divides that exist in this city I still feel a lot of love and a sense of hope for this corner of the world.  Jax seems to be an ungovernable place, especially in the hands of leaders too often lacking courage, compassion and conviction.  Yet, there is strength and richness in every enclave.  So, as we do the long haul work to dismantle broken systems filled with false promises, we will also be creating a new future…one neighborhood, one conversation, one commitment to action, and one gesture of love to our neighbors at a time.