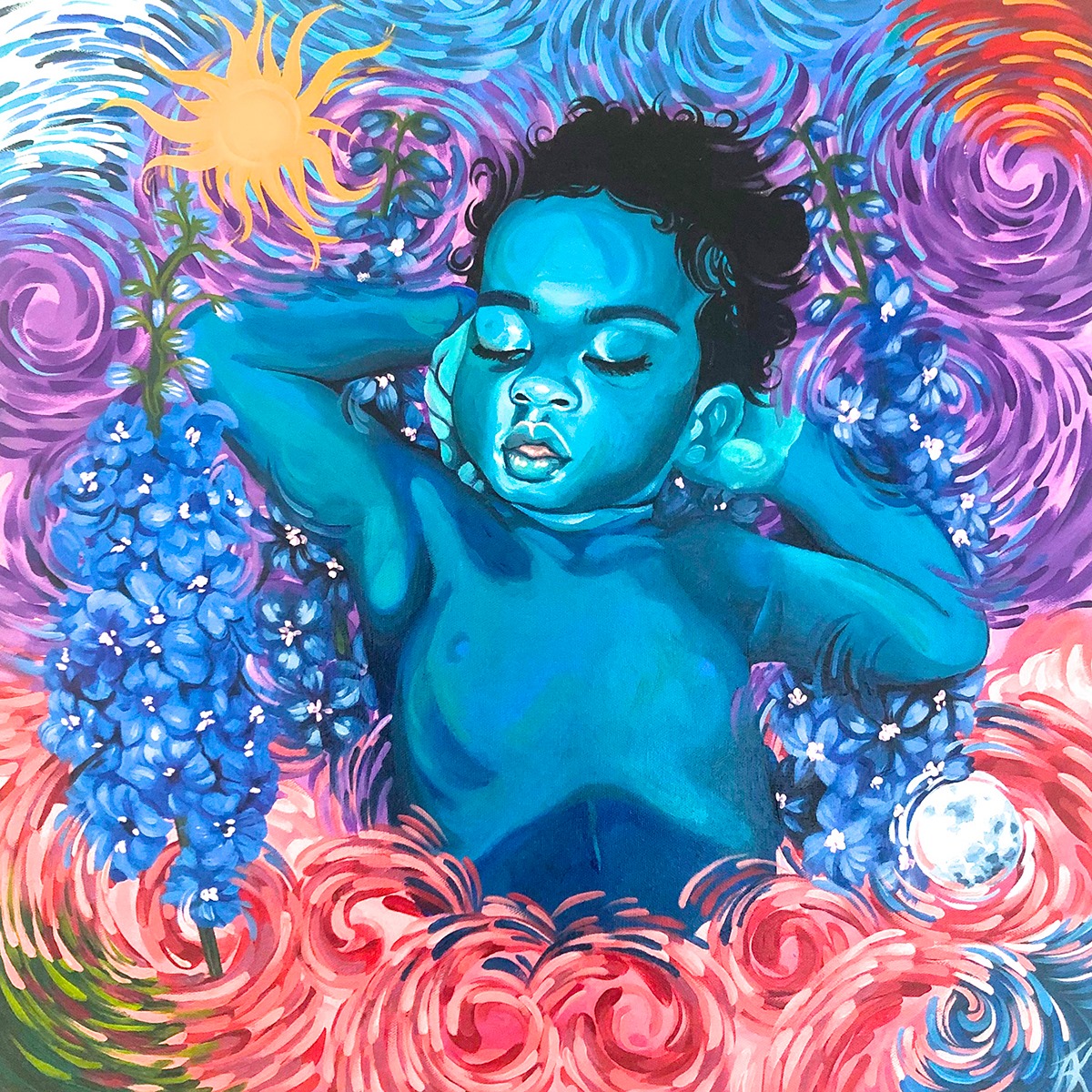 It is such a pleasure to give you all a glimpse into the life of Tatiana Kitchen, who is doing her art at home while isolating with her fiancé and 2-year old son, when you she isn’t in her role as an essential worker.  If you have been to Yellow House in the past two years, you know Tatiana’s work and her larger-than-life murals can be found throughout the city on walls from Arlington to the exterior of our space in Riverside.  She has just finished a mural as part part of a larger project in Springfield called Cosmic Crystals, organized by Nicole Holderbaum (see image of Tatiana standing next to the painting in process on the lead in to this post).

We first had the pleasure of showing Tatiana’s ethereal and energized works of women and children in last summer’s A Simple Show.  Since then, she has created a mural on our Phyllis Street facade, facing the CoRK Art Studios, adding some powerful femme energy to the street.  Currently, Tatiana’s paintings are a centerpiece in the current Magic, Mirth, and Mortality:  Musings of Black Motherhood. 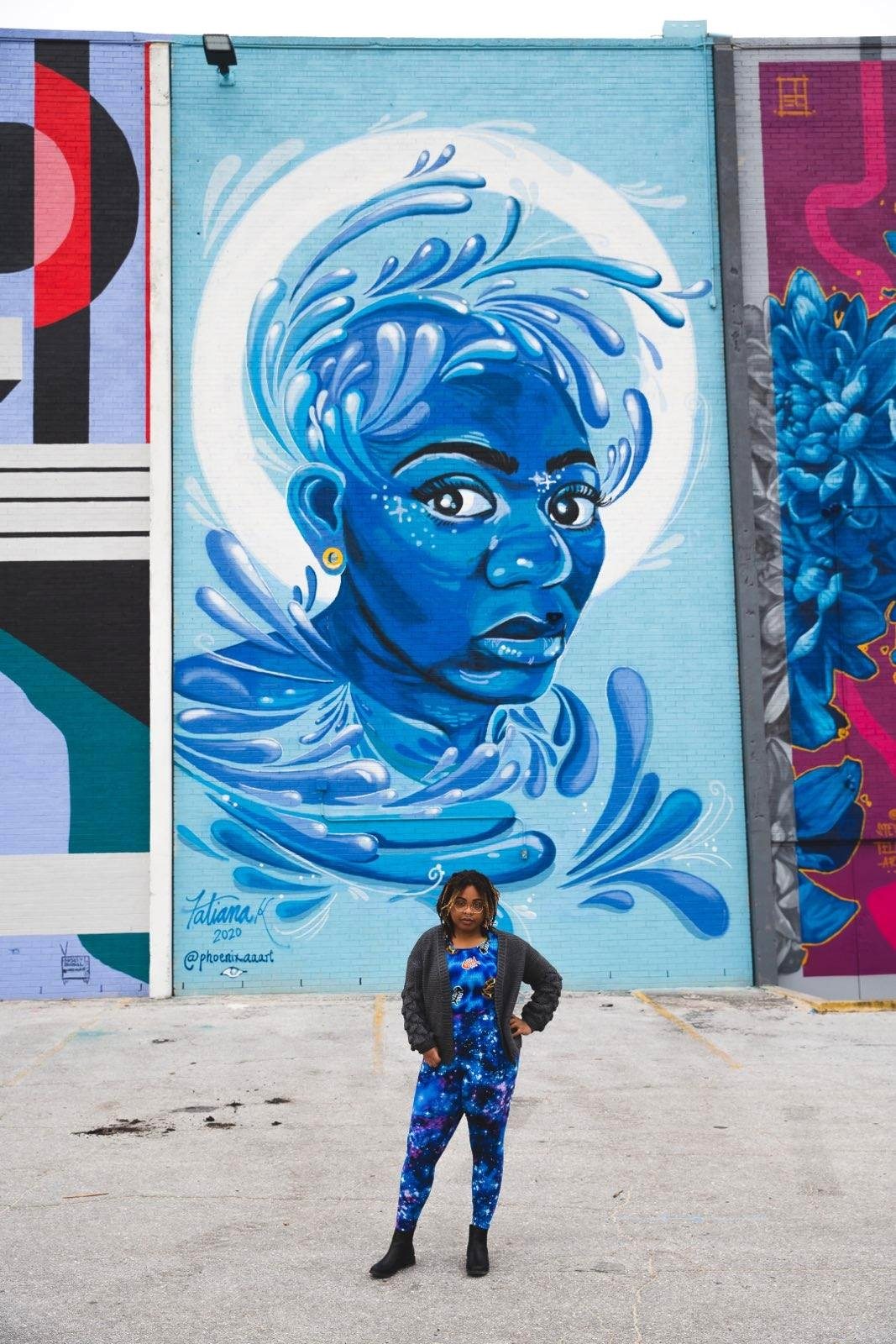 It is hard to describe what it feels like when entering a gallery with one of Tatiana’s works on the wall or walking up to a public mural that graces her imagery.  Her intense color palette, deliberate mark making, and depictions of the spiritual and cosmic nature of Black women and children expand the space, opening up the walls into another realm that is marked by the goddess and the beauty of the Earth and sky. Yet, there is an intimacy to her works that invite the viewer to linger, to contemplate, and to be moved by the people depicted and the world they occupy.

We know that Tatiana has remained busy, creating new paintings on canvas and large walls.  I hope this brief dialogue will inspire you to follow her on social media and view her works on the streets and in our current virtual exhibition.

During this time of physical separation and slowing of the world’s pace, what are you experiencing now that you want to take with you into a new future?

I have always enjoyed deep thinking and getting lost in my own world. This uninterrupted time with my thoughts has shown me that deep thinking is nice for a moment, but I want to be more comfortable living in the present. I’ve instilled it in myself that my thoughts are extremely valid, but I also realize that what brings validity to those thoughts are the actions that they bring about. I can daydream about doing better, being better all day long, but if no action is made, then the thoughts end there and are nothing more than just that. I want to continue my thoughts by bringing them to reality and really acting on them, manifesting the ideas.

I’ve also realized how much I want to be more verbally supportive of others and I want to make more lasting genuine relationships with people from all walks of life, especially people that I can learn from. So these are a few of the things that I’m going to continue to work on. 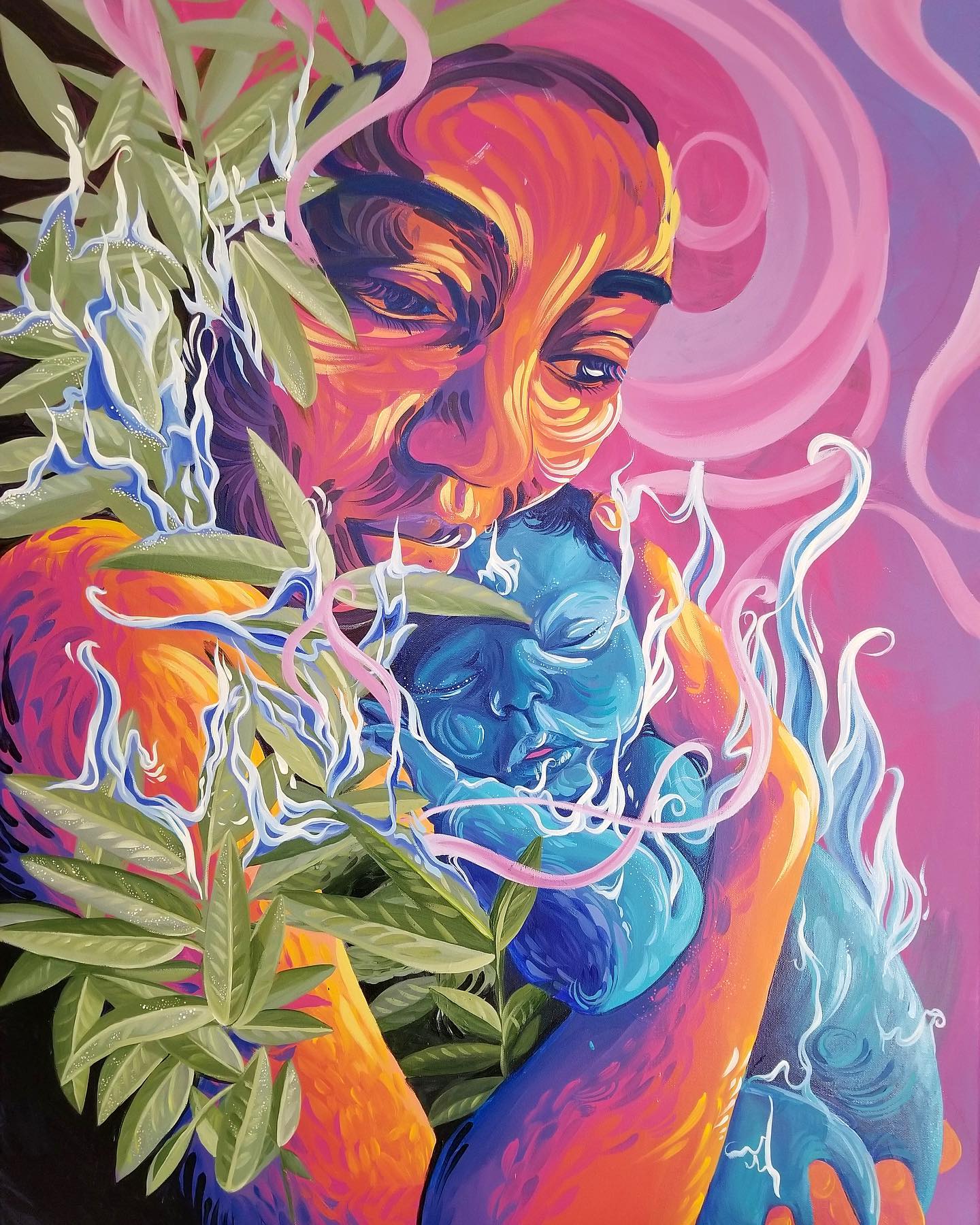 Is there a work of art, a poem, a piece of music, a manifesto, or book that has brought you strength or solace during this time?

I recently watched the movie Interstellar. It’s a movie about deep space travel and humanity being saved from itself by its future self. In the movie there is a poem by Dylan Thomas called Do Not Go Gentle Into That Good Night that is repeated throughout the movie almost like an attempt to drill it into the viewers head.

The line that stands out to me the most is “Rage, rage against the dying of the light”. For me that line brings up the thought of death and the amount of mental strength I imagine it must take leading up to death, because it’s ultimately preparing oneself to say goodbye to the only reality ever known.

It also reminds me of inner conflict and even though it talks about raging against the light it makes me think of surrendering to insecurities and fear. Because in the act of surrendering, that fear is no longer a hindrance. There’s no more conflict and from there new plans can be formulated. That’s the best way to describe how that one line from that poem makes me feel, helping me get my creativity flowing in this time. 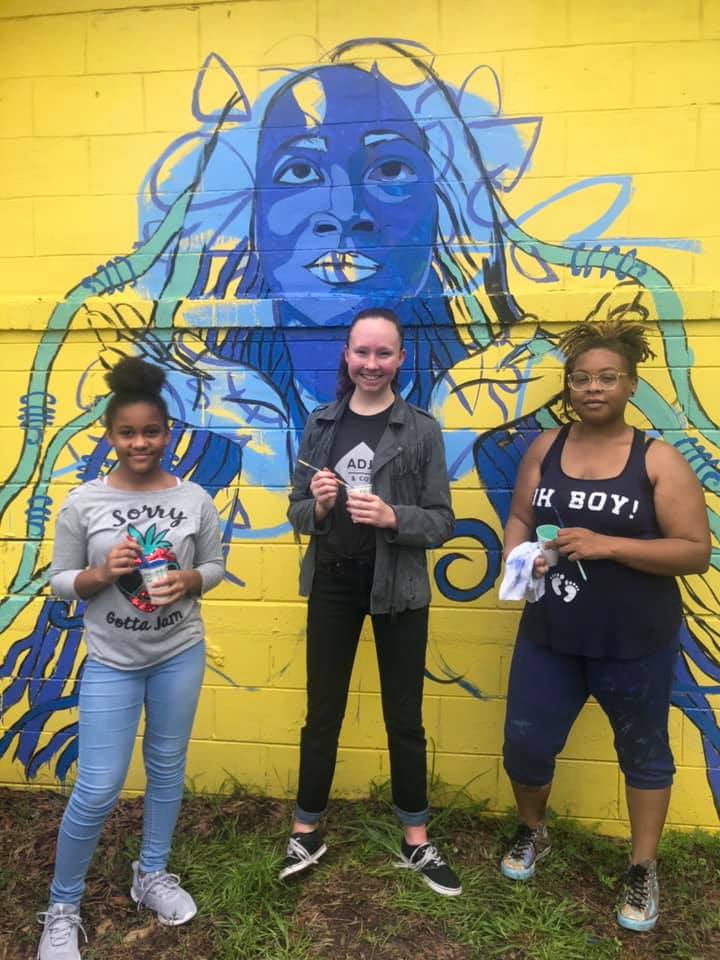 What else is occupying your heart and mind while living through this time of pandemic?

I only want to touch on this for a moment, because I feel it doesn’t deserve much energy, but some people have a superiority complex about what’s going on with this virus. These are some of the same people that blow up at essential workers about insignificant things like not being able to return products at this time or being overly upset about having to wait in line because there’s a limit of how many people can be in a store for the safety of others. This is the current the situation I am directly observing at my other work place. It feels as though many believe their situation is the only one that matters right now, not the safety and health of humanity as a whole. I want to say to those angry people, the world does not and has never revolved around you. It is ok to be upset but there’s a limit to how external you need to be with your  emotions, especially when they’re directed at essential workers who are simply trying to make a living and help others.

We hear you and appreciate you, Tatiana!

About the HOUSE CALL Series

Yellow House is checking in with the artists, writers, performers, and activists who have filled our space with their works and voices.  During a time of crisis, creatives are faced with the same challenges, anxieties, and opportunities as most of us, yet they can offer unique perspectives on how to adjust, evolve, and understand.  As observers and empaths, they can help us see ourselves and the world around us more fully.  And in all honesty, I just wanted to know how our people are doing during this time of threat from virus, social distancing, continued work, and adaptation.  One aspect of community care is to check in our neighbors and we are doing it the way we know how, through a series of intimate glimpses into lives authentically shared.